Did you know that alcohol is the most commonly abused substance in the United States? One in 12 adults, or 17.6 million Americans, have an alcohol use disorder or are dependent on alcohol. Millions of others exhibit problem drinking behavior, like binge drinking. Those with a family history of alcoholism have an increased risk of developing an alcohol use disorder.

Not everyone who misuses alcohol will develop an alcohol use disorder, but it can still cause numerous health issues including cardiovascular problems, increased risk of cancers, psychiatric disorders, such as depression, liver diseases, gastrointestinal disorders, stroke, and unintentional injuries.

Binge drinking, which is drinking large amounts of alcohol in a short amount of time, is especially problematic among younger people. People between the ages of 18 – 34 binge drink the most, but it’s also a disturbing trend among high school kids. According to the National Council on Alcoholism and Drug Dependence (NCADD), 66.6 million, or 1 in 4 people, ages 12 to 17 reported binge drinking and the National Institutes of Health report two-thirds of high school students who drink, do so to the point of intoxication.

A binge is defined as five or more drinks for men in a two-hour period and four or more for women in the same time period. Women metabolize alcohol differently, which is why the number of drinks is less. In fact, alcohol may be even more dangerous for women; the CDC says women who drink seven or more drinks in a week are at higher risk for heart disease, stroke and liver disease. The maximum recommended number of drinks for men is twice that amount.

There are a number of dangers associated with binge drinking including, car accidents, falls, sexual assault, sexually transmitted diseases, unplanned pregnancy, violence, and alcohol poisoning. Alcohol poisoning can be deadly if left untreated. A person with alcohol poisoning has such high levels of alcohol in their body that it shuts down a their breathing and gag reflex. People die because they stop breathing or they choke on their vomit. If a person exhibits signs of alcohol poisoning, such as slow/irregular breathing, unconsciousness, confusion and vomiting, it’s important to call 9-1-1 or get them to the emergency room immediately.

Is your drink the size of a “standard drink?” The National Institute on Alcohol Abuse and Alcoholism (NIAAA) created this chart below that outlines the defined standard drink sizes. If you go out to dinner and order a cocktail or two, how much are you actually drinking? Chances are, one of your drinks is more than a standard drink size, which means you may become intoxicated quicker. If you’re curious, they created a Cocktail Calculator to give you a better understanding of how much alcohol you are consuming. 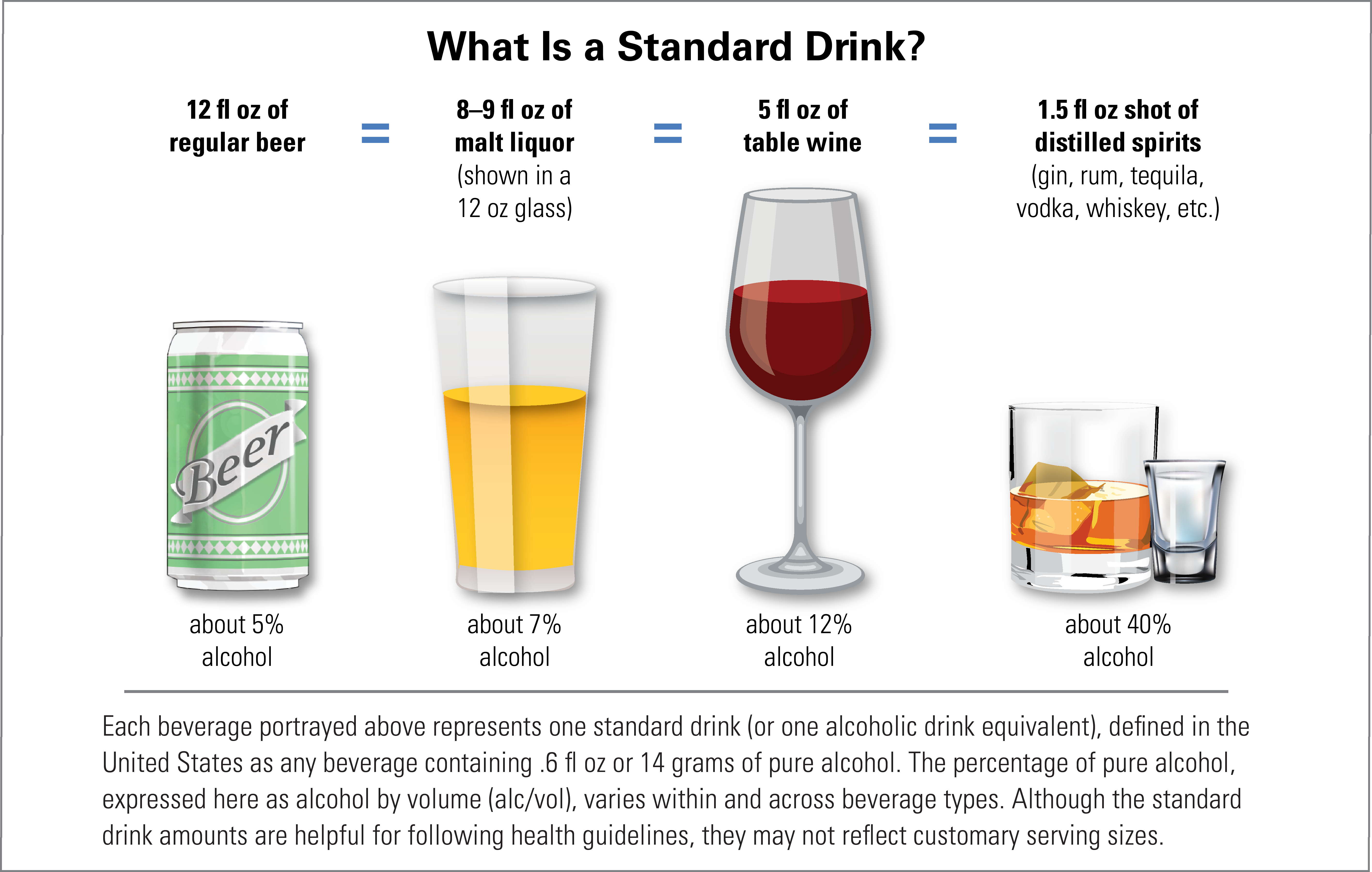 Treatment
If you think you or someone you know may have an alcohol use disorder, educate yourself about the signs and symptoms of problematic drinking behavior. NIAAA has compiled resources to help you navigate treatment options and find treatment providers near you.